Searching for answers after violence

After the shooting ends, the questions begin.  News of the shootings at two New Zealand mosques blew into our lives Friday like the bitter gusts of wind which swept through St. Louis recently. The violence directed toward people of faith once again pushed against the structures of our shared humanity.

The rampage was streamed live via Facebook, which only added to the atrocity. The shooting’s brutalities were made instantly available anywhere in the world until the social media minders intervened. Coupled with the racist screed the shooter is alleged to have posted, the viral nature of the shooting reminds no one is exempt from witnessing terror. We now experience horror in real time.

In the aftermath of the shooting, we are met with the same questions we always encounter. They linger following every hate-filled tragedy. What have we become? Why such violence? What can we do?

These unanswerable questions deplete our spirit. They crush us by their demands. But when we do not completely understand the questions, how will we know the answers? Unable to resolve this dilemma, and unwilling to tolerate ambiguity, we click off the news and mute the sounds of suffering. We remain in our cocoons, watching cat videos or answering questions like “What is your 1980s goth rock band name?” (“Cyclone Bomb Storm,” anyone?) 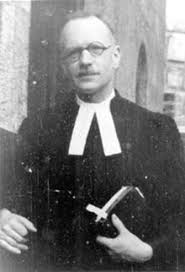 Andre Trochme, who served as pastor in the village of Le Chambon Sur Lignon in South Central France during World War II.

It is no wonder that rates of depression and anxiety are soaring among our youth. We are sipping on a toxic blend of xenophobic fear mixed with anxiety over a changing demographics, muddled with turbocharged technology and a twist of hopeless political division. This is the cocktail we’re served, and it doesn’t come with a cute tropical umbrella and a pineapple slice, either.

Let’s set down the drink for a moment—at least metaphorically. Instead, take the opportunity during Lent to find calm. Lent’s focus on Jesus’ trek through the wilderness and his own wrestling with the demons of destruction provides a chance to see glimmers of hope.

But we cannot find that hope unless we make time to silence the chatter around us and discover the love of God within us.

Back in 1979, Philip Hallie, an ethics professor, published a book that told the story of a French village’s efforts to hide Jewish refugees in World War II. The Protestants of Le Chambon found ways to resist the evil of the Nazi holocaust. They welcomed strangers into their homes, sheltering them from certain death. Thousands of lives were saved.

Our church has taken up the challenge of reading their story this Lent, and I’ve found it a helpful way of encountering God’s light shining in a world of terror.  Hallie’s book, “Lest Innocent Blood Be Shed,” describes the night that the police arrested the town’s pastor. Word had spread across the village that the pastor was being taken to jail. Uncertain if they would ever see their beloved pastor again, the Protestants gathered near his house. Church members surrounded him with signs of support and gifts of love. As he was led into a police car, they sang Martin Luther’s hymn “A Mighty Fortress is Our God.”
In the 1970s, Hallie went to Le Chambon to document their story. He went to learn how goodness had appeared. But the villagers didn’t have answers, they only had questions.

“How can you call us ‘good’?” they told Hallie. “We were doing what had to be done. Who else could help them? And what has all this to do with goodness? Things had to be done, that’s all, and we happened to be there to do them. You must understand that it was the most natural thing in the world to help these people.”

Natural, of course, to those who had learned Luther’s lines, “The prince of darkness grim, we tremble not for him…one little word shall fell him.”